Last month, Palgrave published a book entitled The United Kindgom’s Defence After Brexit. Britain’s Alliances, Coalitions & Partnerships, and edited by Rob Johnson (University of Oxford) and Janne Haaland Matlary (University of Oslo). I wrote the chapter on ‘Franco-British Defence Co-operation in the Context of Brexit’.

This new work examines how the European states, the United Kingdom and the United States will approach the defence and Security of Europe in the medium and long-term. It is often assumed that Brexit, the United Kingdom’s departure from the political and commercial European Union, would affect defence and security profoundly, but the basis of that assumption is rarely analysed. Bringing together a panel of specialists from Europe, the UK, the EU, and the United States, this volume evaluates the relative position they play in Europe’s defence in the era of Brexit. It examines the arguments, challenges, and problems in European defence, and tests them against the residual commitment, cohesion, and capabilities of the states concerned, including Anglo-French military co-operation, the silent Anglo-German partnership, the US-UK Special Relationship, and the emergent Northern Group. 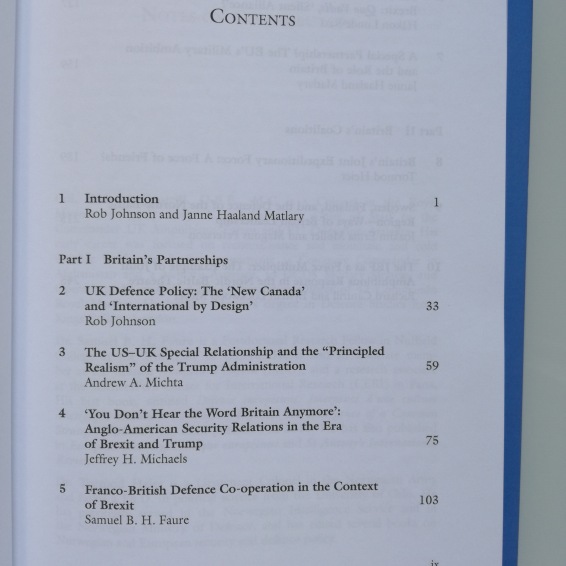