Dear colleagues and students, you’re warlmy welcome to this event organised by the Research Group on the European Union (GrUE) of the French Political Science Association (AFSP) and the SciencesPo’s Centre of International Research (CERI)! In the meantime, do not hesitate to spread the word.

Presentation of Germany and the European Union: Europe’s Reluctant Hegemon?

This new textbook offers a path-breaking interpretation of the role of the European Union’s most important member state: Germany. Analyzing Germany’s domestic politics, European policy, relations with partners, and the resultant expressions of power within the EU, the text addresses such key questions as whether Germany is becoming Europe’s hegemon, and if Berlin’s European policy is being constrained by its internal politics. The authors – both leading scholars in the field – situate these questions in their historical context and bring the subject up to date by considering the centrality of Germany to the liberal order of the EU over the last turbulent decade in relation to events including the Eurozone crisis and the 2017 German federal election. This is the first comprehensive and accessible guide to a fascinating relationship that considers both the German impact on the EU and the EU’s impact on Germany.
This book is the ideal companion for undergraduate and postgraduate students who are studying the European Union or German Politics from the perspectives of disciplines as wide ranging as Politics, European Union Studies, Area Studies, Economics, Business and History. It is also an essential resource for all those studying or practicing EU policy-making and communication. 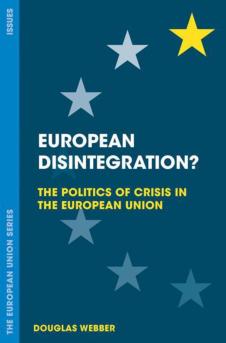 Presentation of European Disintegration? The Politics of Crisis in the European Union

This new book provides a comprehensive analysis of Europe on the brink of political disintegration. Observers of the European Union (EU) could be forgiven for thinking that it is in a state of permanent crisis. The Union has been beset with high levels of Eurozone debt, Russian intervention and armed conflict in Ukraine, refugees fleeing conflict zones in North Africa and the Middle East, and the decision of Britain to leave the European Union. This text offers a concise and readable assessment of the dynamics, character and consequences of these four crises and the increasingly real possibility of European disintegration. High levels of socio-economic interdependence and institutionalization have failed to result in an ever closer union, and yet the proposed theories of disintegration also fall short. Webber instead shows that it is only by looking at the role of the EU’s dominant member, Germany, in each crisis that the potential for an increasingly fragmented Europe becomes clear. Until now, Germany has been the EU’s stabilizing force but this is no longer guaranteed. The fate of the integration process will depend on whether other, more inclusive forms of stabilizing leadership may emerge to fill the vacuum created by Berlin’s incapacity. This text is the ideal companion for upper undergraduate and postgraduate students of the European Union, as part of degrees in Politics, International Relations or European Studies, or for anyone interested in the crises of the European Union.